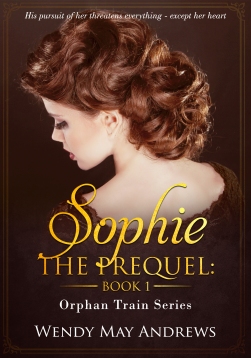 The Orphan Train series was inspired by some real life events.

When friends of mine were adopting a beautiful little boy from another country, I decided to research the history of adoption. I found out some dreadful things, sadly, but I also found out about Mr. Charles Brace (a founder of the Children’s Aid Society) and the Orphan Trains from New York.

I’m sure there were some terrible experiences through the many years that the orphan trains were traveling, but there were far more success stories. At least one of the orphans went on to become President of the United States.

While reading  up on it, I began to imagine the lives impacted, not only of the children, but also of the adults involved. Thus was born the idea for three young women who accompanied a trainload of orphans on their journey out West.

The prequel sets up the story. The heroine of Book 2 wasn’t supposed to be on the train. She is taking the place of the heroine of Book 1. The heroines of Books 3 & 4 fully intended to leave their New York lives behind and set up a shop in their new town. Follow along on their journeys in the Orphan Train series!