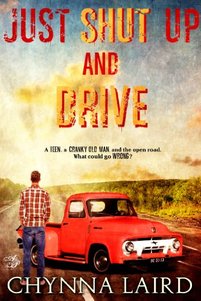 Fellow Canadian author, Chynna Laird, is on today talking about her book, Just Shut Up and Drive. I haven’t read it yet but from the description, it sounds like it would be a good read 🙂

​Here’s a little bit about Chynna:

You’ll find her work in many online and in-print parenting, inspirational, Christian and writing publications in Canada, United States, Australia, and Britain.

In addition, she’s authored two award-winning children’s books (I’m Not Weird, I Have SPD and Don’t Rush Me), two memoirs (the multi award-winning, Not Just Spirited: A Mom’s Sensational Journey With SPD and White Elephants), a Young Adult novella (Blackbird Flies), an adult Suspense/Thriller (Out Of Sync), a Young Adult Suspense/Paranormal series (Dark Water) and a contemporary New Adult novel (Just Shut Up and Drive).

She’s also working on a sequel to Not Just Spirited and Dark Water as well as a few other projects in the works for Middle Grade and Young Adult readers. Watch out for her next Children’s Picture book, Don’t Rush Me, coming out late spring 2017.

To stay on top of her work, you can find her writing snippets, book information, and chat about important issues at her author blog at http://www.chynnalairdauthor.ca.

Where to find Chynna on the web:

One teen, one cranky old man and the open road. What could go wrong?

ar old Wil Carter can think of more than a fistful of things he’d rather do than go on a road trip with his ninety-five year old grandfather. But when Gramps Wilf barks an order, you listen or get an earful of grief.

Wil lost his parents in a horrible car accident when he was five. Gramps has been the only parent he has ever known. Now that he’s ready to go off to college, the old man says he has things Wil needs to learn to be the man he’s supposed to be. But the trip turns out to be more than he bargains for.

Along their week-long road trip across the Canadian Prairies, Wil not only learns tidbits about his own life, but realizes the grandfather he thought he knew has mysteries of his own. With each stop they make, a new layer of emotional truth is revealed…for each of them.

Will Gramps teach Wil what he needs to know before the journey ends? And is Wil strong enough to hear it?

Just Shut Up and Drive is available wherever ebooks are sold, including Amazon – http://amzn.to/2oYX3BL

​Here’s an excerpt from the first chapter:

“You want to do what?” eighteen-year-old Wil Carter asked his grandfather.
Gramps Wilf clicked his tongue. “I know you aren’t deaf, my boy. I said you and me are going for a road trip for a week or so in the summer.”
Wil shook his head, picturing being crammed in his puny hatchback with his ninety-five-year-old grandfather. For “a week or so.” Sounded like the start of a really bad cheesy movie: “The Adventures of Young Dude and Grumpy Old Man.” Wil thought of more than a fistful of things he’d rather do than drive hundreds of miles with a grouchy old geezer. But he knew there was no use in putting up a fight. He’d end up doing exactly what he always did: what he was told.
All Wil wanted to do over his summer holiday was work over at the corner drugstore and hang out with his buddies. After all, it was going be his last summer in Winnipeg before he headed out east to go to university. But, no, Gramps had set his plan in motion, yet again, without him even knowing.
“Gramps,” Wil said, releasing a sharp breath. “You know that I work at the pharmacy every summer. How am I supposed to earn up my tuition if I’m chauffeuring you around the country? Besides, Mr. Bassey isn’t going to give me that much time off. He’s shortstaffed and—”
“Already taken care of,” Gramps interrupted, shuffling over to his favorite recliner, backing up to it, and then plopping himself down. “Jim said he could spare ya for the time we’re gone by
getting the other gals to take their holidays later. Done.”
Wil allowed his jaw to fall slack. “Uh, Gramps? Did it ever dawn on you that, maybe, I’d like to… oh, I don’t know… have some fun this summer, being that I have to go to university in the fall?”
Gramps flipped the footrest of his recliner up, scootched his body back, then folded his hands across his belly. He tilted his head down, staring into Wil’s pale blue eyes over the rims of his Buddy Holly-styled frames. “What? You got a girlfriend?”
“Well, no.”
“Big plans aside from workin’?”
Wil put his hands on his hips then looked up at the ceiling. “No.”
“Doin’ anything special on your days off aside from slackin’ off with those freaky friends of yours at the beach, starin’ at those girls you only wish could be your girlfriends?”
Wil looked back down at his grandfather. “Ouch, Gramps.
And, yeah. Hello? I said I wanted to have some fun.”
Gramps grabbed the remote from the armrest. “Mmm-hmm. Well, ‘fun’ should be spent doin’ things you’re interested in and good at.”
“Well I’m interested in sitting on the beach, and I’m good at looking at girls. C’mon, Gramps. It’s summer. And it’s the last one I have in high school. Some of my friends are moving away to go to school and—”
The old man leaned forward and pointed the remote at Wil, who took that as a cue to shut it. “Let’s get something straight, son. You’re still living under my roof. I know you’re a man now and want to be makin’ all your own choices, but there’s still plenty of things you need to learn about life before you’ll make it on your own. And I’m gonna teach you those things this summer. I got some important things I need to show ya. I said we’re goin’ on a road trip, and that’s exactly what we’re doing. Now either sit on down and watch the news with me or find something more useful to do.”
With that, Gramps pressed the remote with his thumb and Wil heard the TV blaring behind him. The two men glared at each other for a few seconds, then Wil dramatically flopped himself into the green-and-white-checkered barrel chair beside his grandfather’s recliner. He put his elbow on the armrest then leaned his cheek onto his fist.
“Can you at least tell me where we’ll be going?”
“No.”
“What? Why not? If you’re going to kidnap me, I should at least know where I’m going. Especially since I have to be the chauffeur.”
“We’re just gonna make a few stops between here and the other side of Saskatchewan. You’ll find out soon enough. And by the way, if I’m kidnapping ya, then you don’t need to know exactly where you’re goin’, now do ya? Since you’re the driver, you just gotta go where I say.”
From the corner of his eye, Wil saw his grandfather’s mouth tug up into a little smirk. Then Gramps cranked the volume loud enough for any passerby outside to hear the news right along with them. Another subtle sign that their conversation was done, at least from Gramps’ perspective.
Wil squinted at the TV, heat radiating from the nape of his neck. Great, he thought. A week or more of my summer vacation wasted with His Royal Crankiness.
He wondered what his grandfather could possibly have left to teach him. Or if he really wanted to know.

Sound good? Read Just Shut Up and Drive for yourself 🙂 http://amzn.to/2oYX3BL

See The Entire Collection of my Books